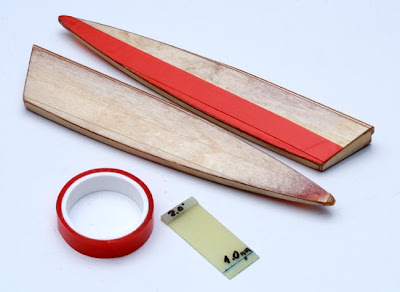 I have tested a new (for me) double sided tape to attach the rear sponsons on my outrigger tubs. I like it very much and it feels almost like they are glued on. But they are still removeable. Me like. :)

The brand name is Stokvis and here in Sweden the tape is called "Stokvis Super". Its a completely clear double sided tape that is about 0.7 mm thick. The roll width is 12 mm and its 2.5 meters per roll.

In Sweden you can buy the tape at Clas Ohlsson for 49SEK or at Jula för 39SEK.

(The upper sponson has the protective film still attached, the lower one has it removed.)

Close up with the tape attached to the rear sponsons.

I also had my rear sponsons ree-aligned a couple of days ago at a new lower position and made this very simple tool/jig for having booth rear sponsons mounted exactly at the same AoA and height. Super simple and very good I would say.

I put the rigger on my new set-up board (a big 19 mm MDF with cut outs for fin and rudder - will post pics at a later date) and sit the rear sponsons on the top of the set-up board and just slide them on the tub so to speak with double sided tape attached. 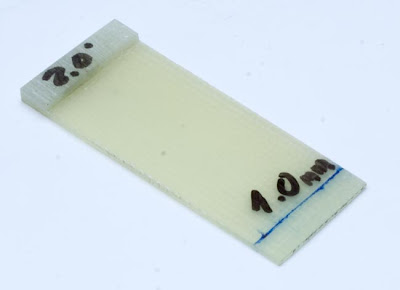 If you want to make your own jig/tool with another AoA you can use this chart to determine the height / length that you need to make it at. That chart can be used for determine the AoA of the front sponsons and the strut also vs the "water" but I will show you that later on (after the NAVIGA worlds in Hungary).