I have updated the Kep's 21 PDF drawing to "2010" spec now. The base for this latest version of my Kep's .21 design is based on the boats me and Mikael Sundgren has raced in 2009. But do note, I have included some features on the new PDF that we have not actually used on our boats (yet) but we would build it like this if we would build a new boat right now...

Some of these features (not used by us so far) are:
1. The turn fin mount is finally changed from the 3-hole pattern that is originally from the Eagle SG .21. I made them like that because it was easier to get hold of an Eagle turn fin but that seems not exactly the case today... The new mount is way better with 4 mounts in the sponson and multiple holes in the turn fin to allow for a broad adjustment front to back.

2. The turn fin itself is also changed due to the fact that it now can be mounted further to the front.

3. Up until now I have also made my front sponsons with a pointy trailing edge but I think it will look better with a cut-off look instead.

No more "freebie" design - this is the race boat!
The original Kep's "freebie" I published in 2008 (downloaded more then 1000 times) was at that time an earlier design I had used... But I raced an slightly different version myself due to the fact I wanted the "freebie" to be tested etc. Most of the time here also the season is so short so when I have a design that I have tested and raced with it all becomes "last" years design so to speak. But the Kep's .21 RACE2010 rigger is actually a mix of the boat I race with myself including a couple of features that I have yet to put into my boat. This is up until today the best .21 rigger design I can publish as its the closest to my own 2010 race boat(s).

Here are some basic Kep's .21 RACE2010 specs:
After plane length: 530 mm (from rear tip of rear sponsons to trailing edge on front sponsons)

As my earlier Kep's boats the RACE2010 is prepared for the CMD engine mount bolt spacing and if you can get hold of them, the CMD hardware in general is among the best also.

As with most "engine-forward-with-exposed-running-gear-and-rear-sponsons" 21-sized rigger designs - the rear end needs to be quite light! You need to pay attention to not using heavy hardware and make the hardware you choose to use as light as possible also, especially the items that are the most rearwards... Use light servos, 5-cell hump-style AAA battery pack and in general - build it light!

As you can see I have designed it around the MAC .21 / CMB .21 Valvola type of in-line engine. If you want to you can of course use an car-engine based marine motor with a 180 deg header. The boat will work equally good of course. But as I like to build my boats quite tight (I dont like to waste space etc) this boat is not really that well suitable for the new CMB .21 VAC engine. See further down the page for and closer look on how tight it will be with that motor...

Click HERE for PDF download of the main drawing. The drawing is in A1 size (594 mm high and 880 mm wide/long). Save the pdf to your favorite portable memory (as a USB-stick) and go to a print shop and have them print it at 1:1 / 100% scale and it should come out in the right size. If you're in doubt, I have included a "control length" part that should measure 740 mm / 29.133" if the print shop has made it right. But the paper normally shrink a little of some reason so if the control length box is like 738 mm its all good anyway.

This is the fuel-cell PDF drawing. Click......... HERE for download. This design is borrowed from Mike "Grimracer" Zaborowski that used to have an RC boat business of his own where he among other things built fuel-cells for people (he now works for Hobbico/Aquacraft). Personally I have always built my tanks with an internal hopper tank but they are a bitch to build... Mike's way of building them seems to be way less hard to make. There is also an excellent video that the ME Time Production guys have on their live site that is an must to see if you want to build one yourself. You need an premium upgraded membership there to be able to see it but the tank building video is well worth the 25 bucks if you ask me.

And finally, here's a close up of how tight the CMB .21 VAC motor carb placement and the fuel tank in front of it in a Kep's .21 RACE2010 rigger would be... As soon as I get my new CMB .21 VAC engine I will put it in my boat and take a picture of it.


Update May 6: The new CMB .21 VAC hydro engine has arrived now. The pics here below show the space between the end of the carb and the fuel tank. Its not too bad I think. I think it will work, especially if you make the tank's upper rear edge with an 45 deg angle as seen in my illustration here above... The tank in the pictures here below is for my normal CMB "green" head motor.

Update 2011: I would strongly advice you to not use a VAC .21 engine in your KEP's .21 or any other .21 rigger really. Its simply not a good engine (at least not for this type of application)... 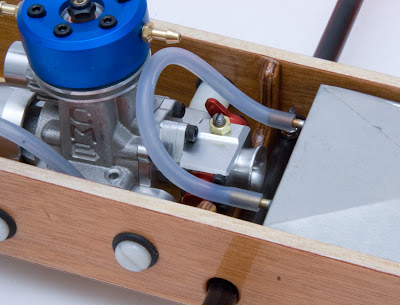 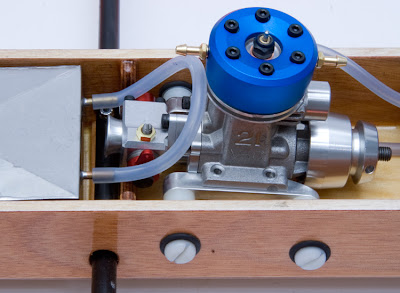 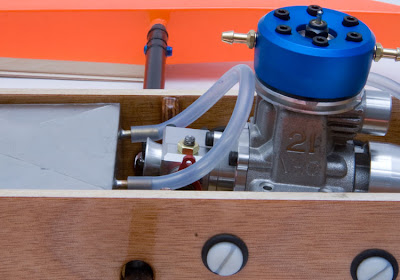 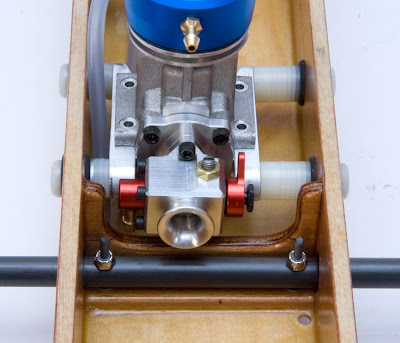