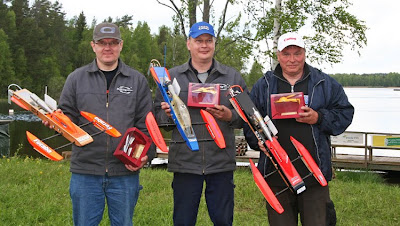 The first Swedish hydro nationals of 2010 was held in Eksjö May 29-30. On Saturday we raced the 3.5 cc classes as in OTA tunnels and hydro. The most popular hydro class in Sweden is 3.5 cc and has (according to me) had the closest hydro racing the last few years and this year it was no difference.

At this nats we had the pleasure to see a small comeback from former NAVIGA FSR-H 3.5 world champ Jörgen Andersson in 3.5 and he was really fast of course. Jörgen brought two .21 riggers and he raced one of them - let me come back with more pics of booth of them tomorrow. The race boat was his trusted 2006 world champ Eagle rigger but with a gearbox! The sound was special and the big prop was even more so... ;)

Personally I had a good race and won most of my heats except the two times I had to meet Jörgen... The last heat was the decider as either me or Jörgen had to win it to win overall. But it was the roughest water all day and my Kep's was good but not as good as Jörgen's Eagle in that heat. But it was very good and fun racing - some of the heats where very good and fast even though we had to make the oval slightly shorter due to the narrow space in the lake.

Sad to say it but this was the last hydro / tunnel race ever in this lake. The club have been booted from the location after this summer... 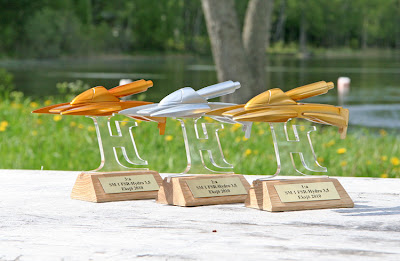 Sune Persson had outdone himself BIG time when he had custom made these tiny riggers as prices of all three rigger classes... They are hand-molded and made out of 7 pieces I think. Its by far the coolest prices I have ever got at a race.

The riggers even had rudders and carbon sponson rods... Speachless. 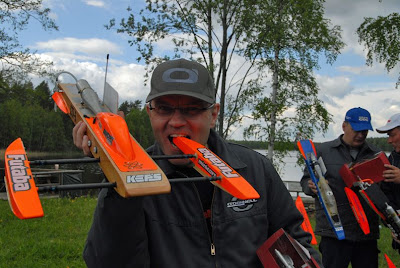 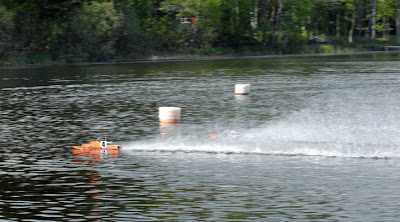 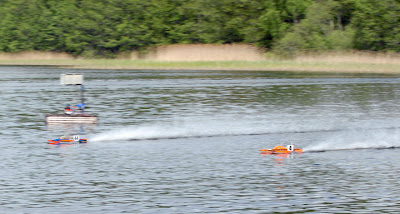 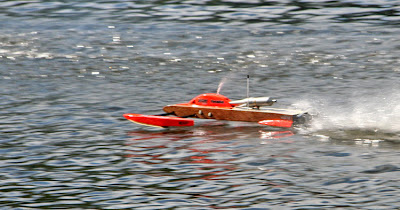 My Kep's 21 RACE 2010 in testing after the race was over (no number sign on it). Same set-up as in the race but a Sholund H7 3.75 prop on it and with Jörgen behind the 4PK wheel (so I could check radar the speed and snap a few photos) it topped 106 kmh (65.8 mph) but the course is a little short and the pipe was a little long (for only doing top speed trials). In race set-up I would think it does about 95 kmh which is way more raceable at least on this side of the pond. But not too shabby for a propped-up race set-up even though I would not race that prop on a Kep's 21. The Sholund H6 with 3.46 or 3.6 cup is better suited race props for a well tuned Kep's 21 RACE 2010 rigger I think. Overall I was very happy how the boat handled and its easy to drive and even can turn left a little! 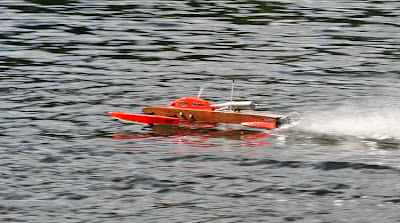 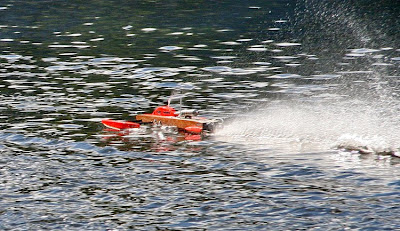 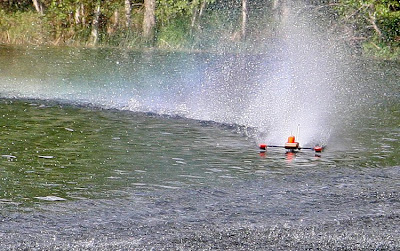 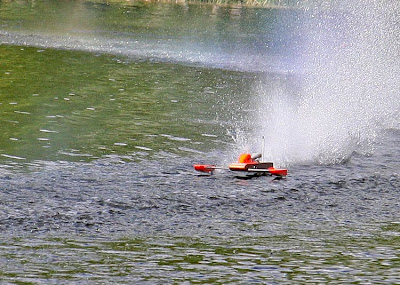 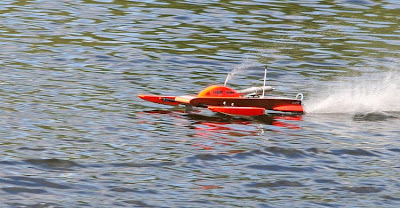 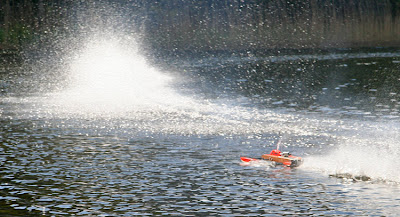 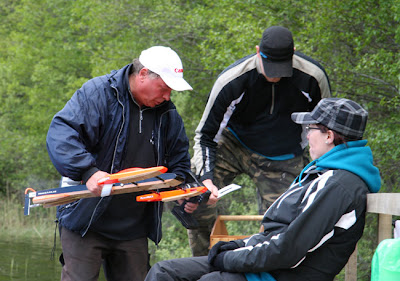 Mikael Sundgren with his Kep's 21 - he finished third. Mattias is co-driving and Mattias girlfriend Linda is watching on the pontoon. It wasn't too warm on Saturday...

Gartne runs close to the shore...

Mikael's Kep's 21 - this one is the earlier "freebie" design - not the one I have down-loadable now. 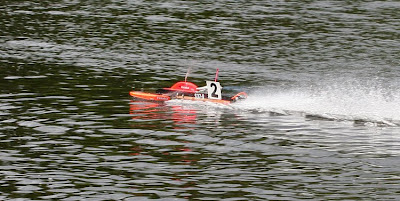 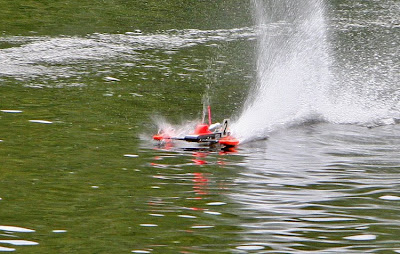 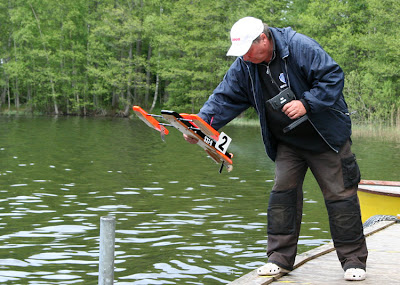 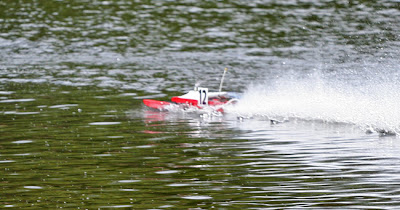 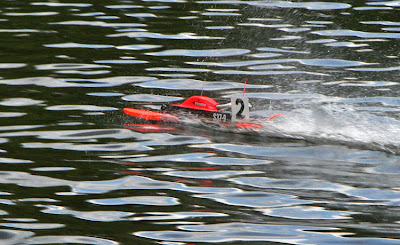 It was not smooth waters but not that rough either (most of the time).

Close to the shore turn #2. 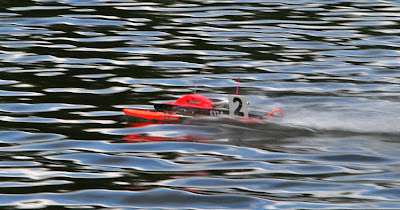 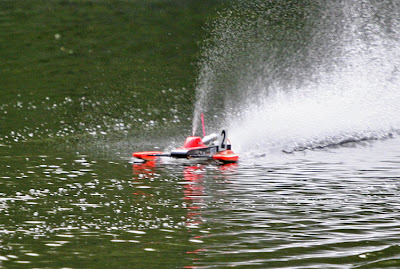 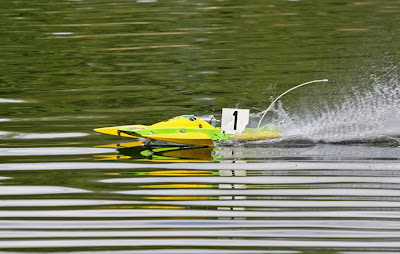 Christer Gustafsson's Road Runner .21 seemed to have lost some speed during the winter brake... 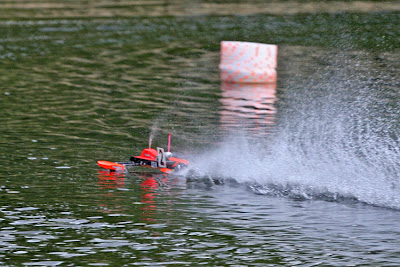