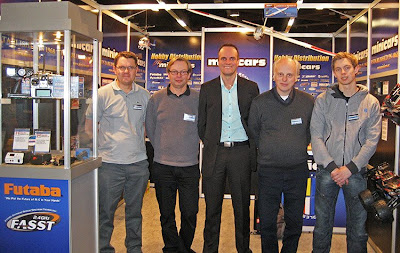 It's me (Niklas Edlund) to the left, then my boss Per Gustafsson, Tommy Jeppson, Kaj Johansson & Henrik Gustafsson to the far right. 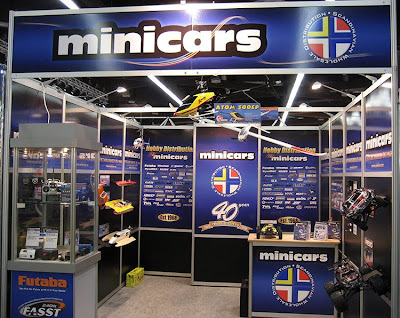 I'm just back from the worlds largest toy & hobby show in Nürnberg Germany. We had also this year our own booth in Hall 7 (we = Minicars = my job). As Minicars is a Scandinavian hobby distributing company we have the booth mainly for meeting people and new & existing dealers visiting the show.

We didnt have that many new boat related stuff in our booth but I had my own Aquacraft VS1 tunnel hull on display and two Dragon Hobby brushless electric boats from Dragon Hobby. One was the Minicat 820EP with dual BL motors and the other a pre-production new model called Sword. It has an unique self-recovery designed hull that makes it turn around if you roll it up-side-down. Looks good and what I've seen on their videos it seems pretty fast also.

As we distribute Futaba here in Scandinavia @ Minicars we also had a few new yet to be released news from them to show. A new 2PL-2.4GHz 2-channel wheel radio (R603GF receiver) and a new version of their 10-channel 10C radio, now with native built in 2.4GHz system (no module). The new programmable digital S9070 servo can be interesting in our boats also. I'll come back at a later date with more info of it.