Now its time to make the bulkheads and start assembling the tub!

Carefully check the PDF's for the dimensions of the bulkheads. If you build the T2 to the specs you can drill the holes for the linkages, cooling tube and the stuffing tube before you glue them in.

The sides of the bulkheads need to be of the same width (as close to 62.0 mm as possible). The #3, #4 & Transom also needs to have the bottom edges/corners at true 90 deg. The upper part of these 3 bulkheads can be a little bit too high as they are easy to cut down after they are glued in.

Bulkhead #1 & #2 just needs the sides to be parallel as they are hanging in the air when in the jig so booth top and bottom edges can protrude (up/down) from the tub-sides. They will also be cut down after all the bulkheads are glued to the tub-sides.

These are bulkheads from the prototype T2's. The narrow one on top of the #3 bulkheads (the one with dual tubes for the push-rod seals) aren't used. And the right-had transom in the picture is also made of gaboon plywood. I don't recommend you use that for your T2. Glue/laminate two 3mm (or two 1/8") aircraft birch plywood together instead and use that hard laminate as transom. 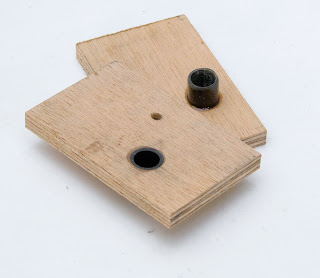 Bulkhead #4 - the rear radio-box bulkhead. The tubes are scrap pieces of the same 10x8mm carbon tube we use as sponson tubes. Also check the PDF's - that tube is angled somewhat as the steering linkage is not straight. The push-rod-seal-tubes are glued with 5-min epoxy. 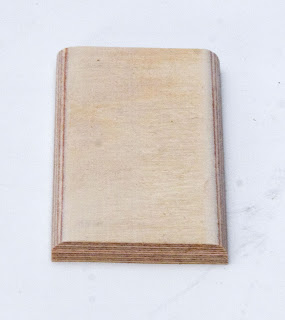 This is not a "bulkhead" really and its not included with measurements either (as its not really that important with the length - the width need to be as exact as the other bulkheads though). You can see it on the main PDF as a side view dotted line where the antenna tube is located. We use it as a deck-doubler in the radio-box to get some more material there for the switch plug and the brass tube for the antenna tube. The material is not that important - I used 4 mm thick birch. The side with the rounded edges would be towards the bottom... 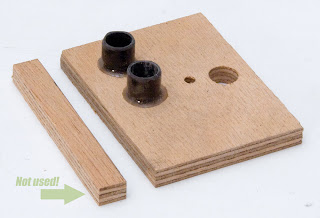 Bulkhead #3. The main bulkead in the front of the radio-box. The small strip is not used on the Freebie. That was a "feature" only on the prototypes. 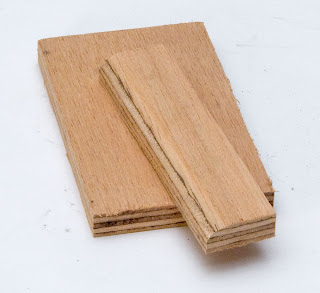 Bulkhead #2 and the nose-doubler that is used for providing more material/thickness to this bulkhead as you bolt the front cowl mount at this location.

Here you can see bulkhead #3, the deck-doubler and bulkhead #4 and the marked-out tub sides. Note, on my T2's I added a third tube in the bulkhead #3 - an 12x10 aluminum tube (the same tube we glue in the sponsons and tub for the sponson tubes). The purpose for that is to get an good solution for the wires for the upcoming telemetry... Note also the flushed brass inserts for the numberplate.

This is one of my honeycomb flat boards that I use for doing the tub-side laminates and also when doing/gluing the tub. Its covered with thin plastic food wrap so the glue wont stick (hold with masking tape on the bottom). 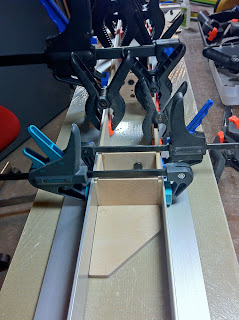 Here all of the bulkheads and the tub-sides are aligned in the simple glue jig that basically is two aluminum 90 deg angles that are straight. Then there's lots of clamps... Note, the home made 90 deg angle that is just a bit narrower then the outside width of the tub. That's for checking that the transom is at an true square angle. At this point, nothing is glued yet. You need to be satisfied at this step before you start gluing the bulkheads to the tub-sides. Push down the three rearward bulkheads so you are sure they are resting on the flat board! It will also show at this point how careful you where when doing the bulkheads as if the edges where not true/straight etc then it would be harder to get it right... 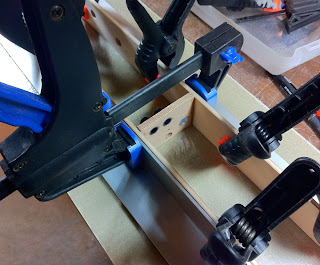 Start gluing! I use ZAP-a-gap (green-label) CA glue with the tip extension that comes with each bottle. Just put on a drop or two on each joint top corner and let it run down... Repeat on all joints. Don't use any kicker at this point - just let the CA to soak into the wood. 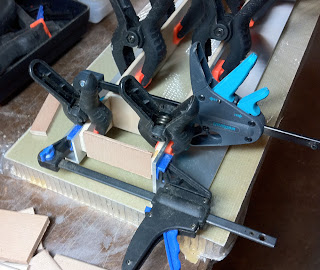 The front bulkheads are glued in. Here you can see that the front two are too "high". That will be trimmed down in the next step. 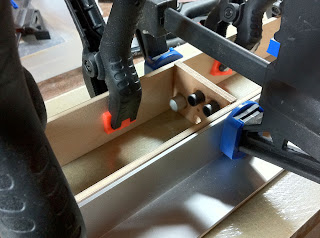 Close up of the #3 bulkhead while gluing. 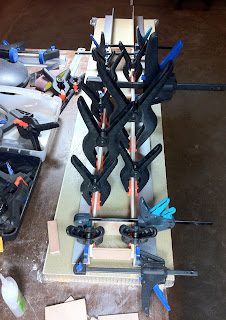 The complete tub with all bulkheads CA glued in. Leave it for a an hour like this!

After an hour has passed you can start removing all the clamps. Be a little careful as the tub-frame at this point isn't that rigid yet. Now its time to add some more ZAP-a-gap CA glue to the glue joints. Add another bead of CA glue holding the tub-frame at an 45 deg angle. Do a couple of joints at a time. Let the glue soak in and after a minute, take some house-hold paper and wipe most of the CA glue away. Spray a light coat of CA-kicker to those glue-joints and move on to the next... Repeat until you have re-glued all bulkhead joints...