Here is the official program for the soon to be 2017 NAVIGA FSR World Champs in Jawor Poland.

BUT, the hosting organisation published a shocker of a news yesterday as the posted this info:

ANNOUNCEMENT ON CHECKING NITRO-METHANE CONTENT IN FUEL
(information added  2017-07-18)
As set by the FSR Section of NAVIGA, adopted at the last World Championships in Hagenwerder in 2015, the content of nitro-methane in modeling fuel can be as high as 23%. During this year's World Championships in Jawor will be conducted control of this indicator (CMB tester).

Today (July 20) they published an correction though:


CORRECTION ON CONTROLLING CONTENT NITROMETHAN
(information added  2017-07-20)
I inform that during the World Championship in Jawor tests of nitromethane percentage in competitors’ fuel will NOT be performed. I also apologize for posting the previous announcment pertaining to those tests. The small amount of time left until the Championship, and moreover not being able to use a certified device are basis of not following the rule of fuel tests. I apologize all competitors for the posted misleading information.
The Organiser

The excuse though is that they have no time to get a certified device to check the fuel with - NOT that it's NOT even a Naviga rule (regarding a limit of nitro)... Very strange.

Note also there is still NO info what so ever from NAVIGA themselves regarding this World Championships - neither on their website or on their Facebook page.

It looks like the organizers in Poland is running it by themselves so to speak or that NAVIGA doesn't care about the race...!? 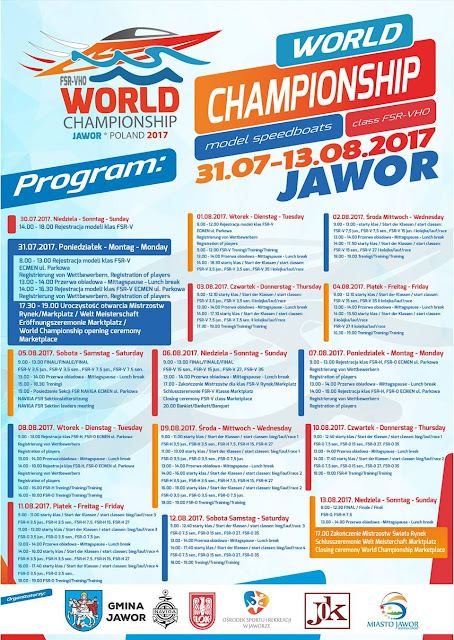