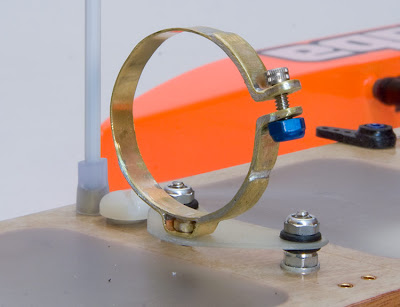 DIY pipe mount made out of a K&S brass strip, a plier, Staybrite flux, silver solder and a hot Ungar iron... :) I think it works good. It's the same design that I included in the Freebie drawings. The base plate is a 1 mm thick GRP plate with 5 mm holes for the rubber grommets. The grommets have 3.5 mm long K&S brass tube spacers in them.

The two holes U see to the right is charging connectors glued in place with epoxy. No need to remove the self adhesive plastic covers for charging. :) 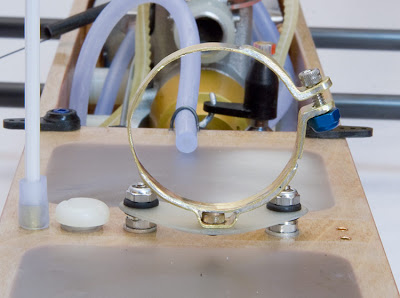 The mounting screws through the tub deck are stainless 4-40 screws with low-profiled aluminium nylock nuts. Under the tub's 0.8 mm thin plywood deck is a 5 mm thick plywood as reinforcement. 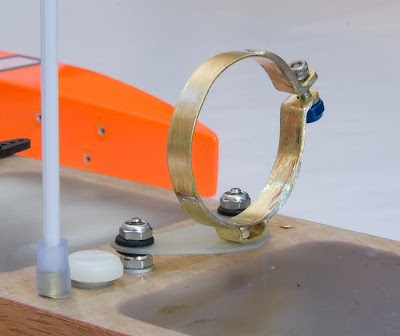 The nylon screw is a "plug" to reach the Futaba on-off switch which sits below. It's the same 1/4-20 threaded screw we use for the motor mounts "covered" with a large diameter Du-Bro silicon tube so its seals against the hole in the tub deck. 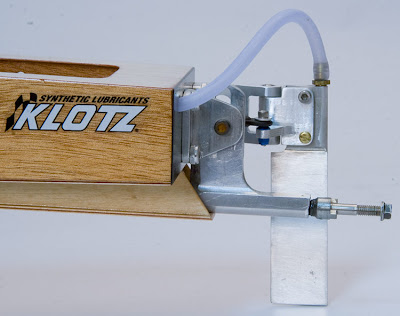 All CMDi running gear I pulled from another boat. The strut "blade" is cut down to make it lighter. It sits on top of the prop-support "ski" ramp. About 0.5 deg negative AoA on the strut (I have not messured it though - yet). 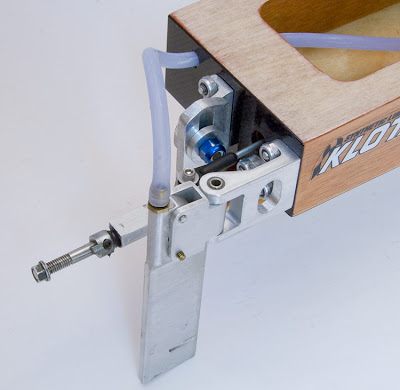 The CMDi rudder blade is made lighter and the base also... Notice the hollow shaft... ;) 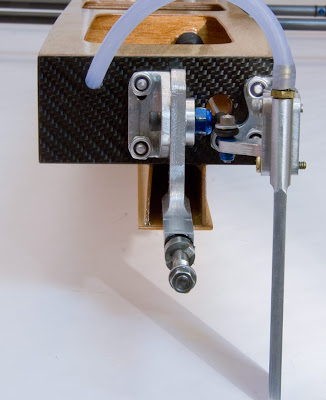 I have for three years used aluminium 6-32 screws and nylock nuts as fasteners for the strut mount and rudder. I have never broken one! 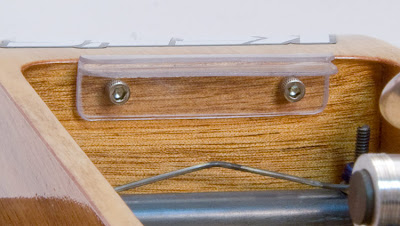 This is an Eagle type of cowl bracket made out of 0.8 mm polycarbonate that I bent at 90 deg. The screws are normal stainless 4-40. There is a low gaboon plywood doubler on the inside of this bulkhead so there is less chance of drilling through inside the nose... The nose is hollow btw. 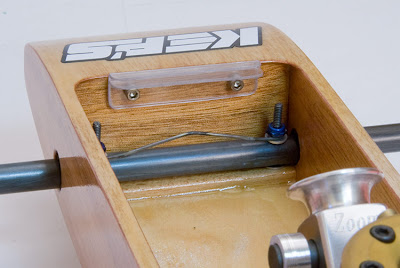 I make the tank mount "loops" out of 1.4 mm K&S music wire. There is a loop at each end that the 4-40 screws go through. You must heat the wire red-hot with a open flame torch before bending, and then re-heat, and bend, and re-heat... Well you get the picture... :)

I mostly use a thin strip of fiberglass tape as tank hold downs that go around these wires... I'll take some photos later of it when the tank is strapped down if you still dont understand it. LOL 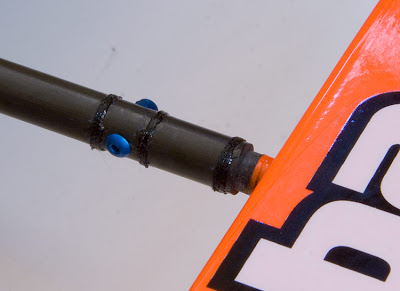 The 10 x 8 mm carbon fiber tubes we use are kind of fragile. So we reinforce them with a sewing thread (the thick one - we call them bear-threads in Sweden) and CA glue. The blue screws & nuts are 1/2" long 4-40 aluminium. 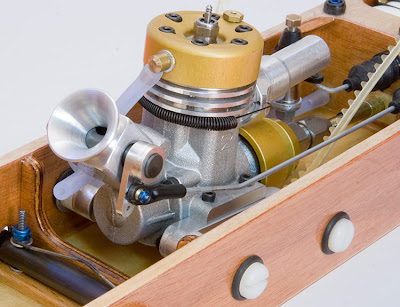 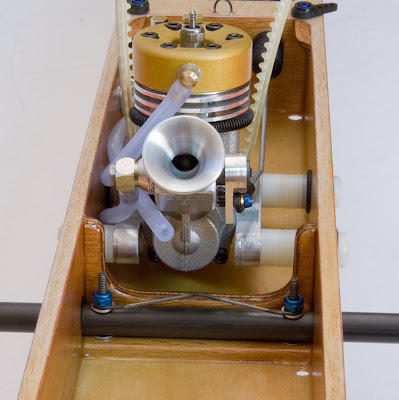 Starting belt is Aquacraft GrimRacer 15" and yes, the motor is not in the middle of the tub. :) 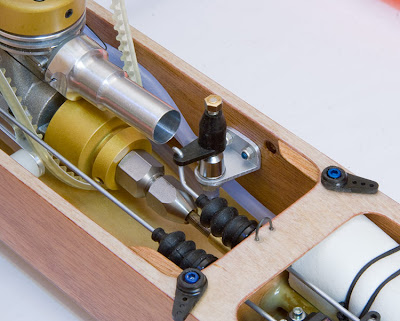 Futaba servo horns as cowl locks. The small U-loop between them is a pressure tube holder made out of 1 mm K&S music wire. Aquacraft GrimRacer pushrod rubber seals is used. Kalistratov fuel needle. The rear cowl "seats" are made out of left-overs from the gaboon plywood tub sides. Recycle! :) 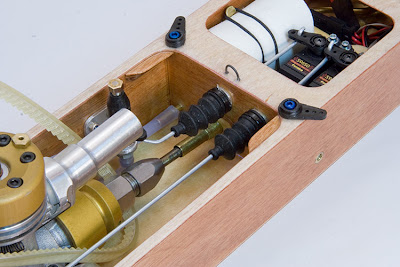 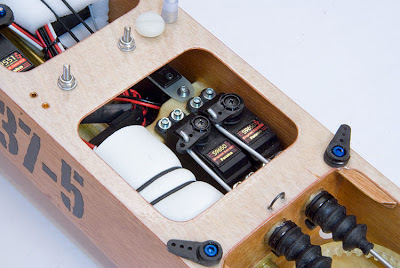 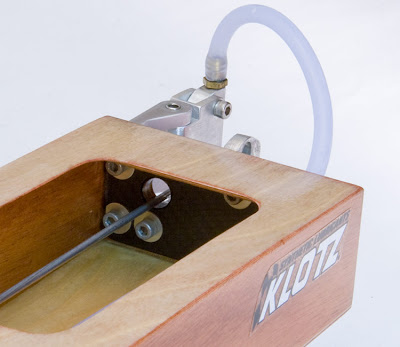 0.8 mm carbon fiber sheeted transom on booth sides. Aluminium 6-32 screws from the inside of course. The two outer aluminium washers need to be cut down slightly to clear the tub sides. 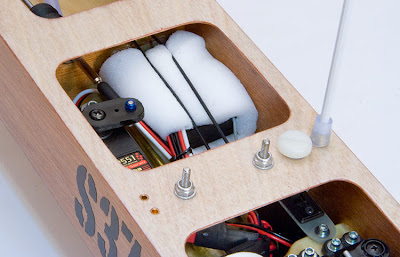 FAAST receiver is under there... S9551 steering servo. U can see the 1 mm thick GRP plate for the Futaba switch here also. 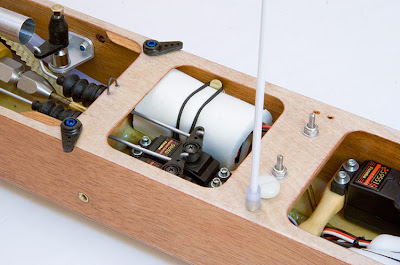 Mikael Sundgren type of DIY hold-down "hooks" are used for booth the battery pack and receiver. I'll publish an detail shot of it later on. 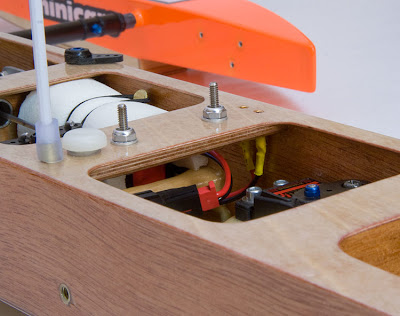 Female 2 mm dia charging lead adapter is glued in from below. U can see the 5 mm thick plywood deck doubler here also. 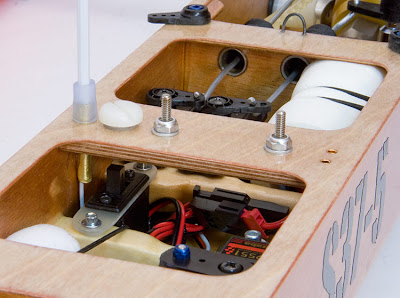 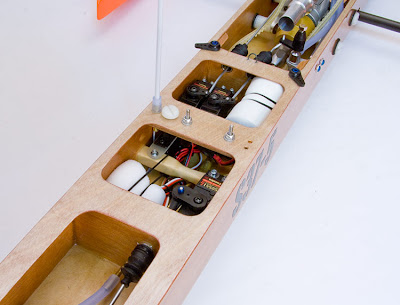 you sure build some nice boats.....