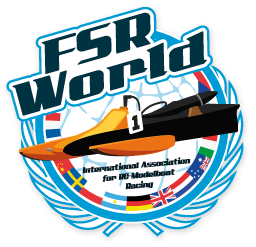 As many of you know in August 2014 the first FSR World Championships was held in Dessau (Germany). 21 Countries attended and a total of 481 boats took part. FSR World was started by Jörg Banasak and a big thank you must go to Jörg and Martina for organizing the Championships.

At the Championships an open meeting took place where many competitors attended and it was decided to make a committee to run FSR World. Nominations were made and the next day all teams were asked to vote.

The Committee voted in to take FSR World further is:
The committee would like to thank Jörg Banasak for starting FSR World and giving the FSR racers the chance of a new beginning.

After the committee was elected we had two short meetings to discuss what was needed next. We discussed that countries could join FSR World for a low fee of 50 euro per year as at the moment we do not need much money for running costs.

We are looking to hold a World Championship in 2016 for V H & O classes. We have started discussions with some countries but are open to offers from other countries if they wish to hold the Championships either combined or split with H & O or V.

The committee are preparing a list of what is necessary to run a World Championships and once our website is updated it should be available as a download.

We discussed a new rule book which is being worked on now and we discussed changes to how the Championships are held to try and make them better for both racers and the people hosting the event.

We will try to include B and C finals in all classes to give competitors more races.

We will also bring in some sort of rule to stop team driving and deliberate attempts to take another competitor out.

We will look at stronger red cards for abuse of other racers and judges on the pontoon.

We want to introduce maximum half days for the judges and lap-counters as all day is too long to be on the pontoon and still judge properly.

We will be asking countries teams to help at Championships in watching for missed buoys. This will allow the judges to concentrate more on the racing.

We will also be asking teams to provide crews for the rescue boat during the event. This will help organizers who do not have enough volunteers to fill all of the jobs.

We also discussed a possible championship/league run over various races during the year and a ranking system to determine the Champion in each class. This could be in Europe and Asia for all classes.

We are open to the ideas and suggestions from our fellow racers and will be happy to answer any questions you may have. Please contact any member of the committee with your ideas and we will take them into consideration,

We look forward to working with you all.