NAVIGA has now made some more official statements that there indeed will be an NAVIGA FSR World Championships being held from August 1 to August 12 2015 in Germany.

This is their official statement made in January about the event - LINK.

Back in January most of us believed that it was just "talk" from NAVIGA (buying time so to speak) but it seems there was more then that behind their statement. It seems there are several clubs under the German Federation Nauticus that has joined forces and will make it happen in 2015. See below.

The Naviga World Championship class FSR (all classes) will be held from 1 till 12 august 2015 in Germany. Further information will be given out later in the year. 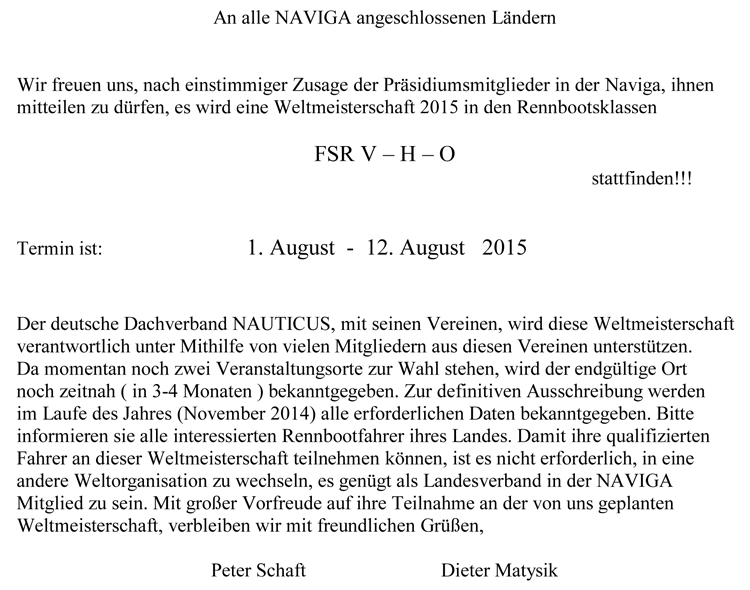 Google translation of the above NAVIGA statement made in German (WHY do they keep making official statements in German language!?):

"To all NAVIGA connected countries
We are pleased with the unanimous consent of the members of the Bureau of Navigation in , tell them to supply main , it is a World Cup 2015 in the racing boat classes: FSR V - H - O take place !

Date is : August 1 - August 12, 2015
The German federation NAUTICUS , with its clubs , this World Cup is responsible unterstützen with the help of many members of these clubs. There currently are two venues to choose from , the place is endgültige more promptly announced ( in 3-4 months )  To be definitive tender during the year ( November 2014 ) posted all the required data . Please inform all interested racing boat driver of their country. Thus, their qualified Drivers can take part in this World Cup, it is not necessary in a to change other world organization , it suffices as a national association of NAVIGA To be a member . With great anticipation for their participation in our planned

World Cup, we remain, Yours Sincerely,